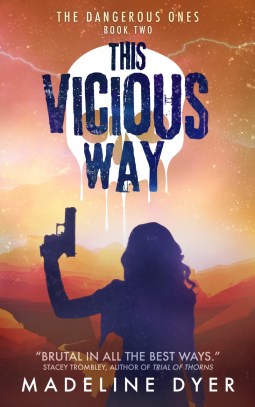 Aged five, Inga was snatched from her sister’s arms by Bridie’s Assassins, a group of Untamed rebels who believe the way to win the War of Humanity is to use more Untamed children as soldiers. For seven years, Inga’s life consisted of violence, exploitation, and death as they shaped her into their most deadly weapon. Then she escaped.

Now twenty-one, Inga has spent the last six years seeking revenge on the assassins–using the skills they taught her against them–and trying to find her family. She knows the Gods and Goddesses are behind her, because with every assassin she murders, Inga’s gifted with a vision of her cousins, Keelie and Elf. And soon–very soon–Inga is sure she will find her family again. She’s just got to kill all the assassins first.

But when she discovers her own sister is now leading the assassins, Inga’s resolve is tested. Sure, she will stop at nothing to get the life she deserves–even if it means putting other Untamed in danger and losing herself–but can she kill her own flesh and blood?

MADELINE DYER lives on a farm in the southwest of England, where she hangs out with her Shetland ponies and writes young adult books–sometimes, at the same time. She holds a BA Honors degree in English from the University of Exeter.

This is the second book in The Dangerous Ones series.  This is also the second book that I have read by this author.  This could also be read as a standalone.  .  I found her first book much better than this one.

The story is being told by Inga from, changes from the past to the present.

I really wanted to like this book, I had a hard time getting into it and I found it to be really slow and dragged out. I couldn’t get into the characters.  I did like how Amelia was brought to life in this one, I wanted to learn more about her and see how she became part of the story.

I have seen that this got a lot of good reviews, but I am just giving it three stars.