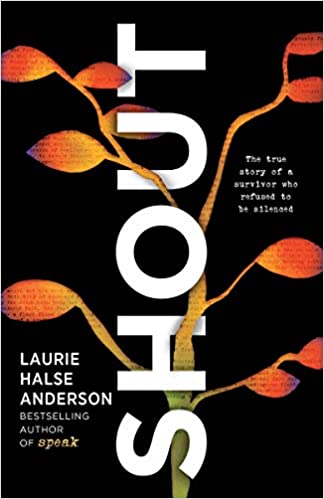 A New York Times bestseller and one of 2019’s best-reviewed books, a poetic memoir and call to action from the award-winning author of Speak, Laurie Halse Anderson!

Bestselling author Laurie Halse Anderson is known for the unflinching way she writes about, and advocates for, survivors of sexual assault. Now, inspired by her fans and enraged by how little in our culture has changed since her groundbreaking novel Speak was first published twenty years ago, she has written a poetry memoir that is as vulnerable as it is rallying, as timely as it is timeless. In free verse, Anderson shares reflections, rants, and calls to action woven between deeply personal stories from her life that she’s never written about before. Described as “powerful,” “captivating,” and “essential” in the nine starred reviews it’s received, this must-read memoir is being hailed as one of 2019’s best books for teens and adults. A denouncement of our society’s failures and a love letter to all the people with the courage to say #MeToo and #TimesUp, whether aloud, online, or only in their own hearts, SHOUT speaks truth to power in a loud, clear voice– and once you hear it, it is impossible to ignore.

You Can Purchase it HERE

Laurie Halse Anderson is the New York Times-bestselling author who writes for kids of all ages. Known for tackling tough subjects with humor and sensitivity, her work has earned numerous American Library Association and state awards. Two of her books, Speak and Chains, were National Book Award finalists. Chains also made the Carnegie Medal Shortlist in the United Kingdom.

Laurie was the proud recipient of the 2009 Margaret A. Edwards Award given by YALSA division of the American Library Association for her “significant and lasting contribution to young adult literature…”. She was also honored with the ALAN Award from the National Council of Teachers of English and the St. Katharine Drexel Award from the Catholic Librarian Association.

Mother of four and wife of one, Laurie lives in Northern New York, where she likes to watch the snow fall as she writes. She and her husband, Scot, plus dogs Kezzie and Thor, and assorted chickens and other critters enjoy country living and time in the woods. When not writing or hanging out with her family, you can find Laurie training for marathons or trying to coax tomatoes out of the rocky soil in her backyard.

and on her blog,

This is the first book that I have read by this author and it was powerful.  When searching for this at my local library and seeing all the good reviews I knew I had to get it. And I’m glad I did.

Wow, what a great book. Intense but informative and keeps you sucked in.  I highly recommend this book.

Thanks for Reading One Girl and a Book